I’ve realised that my blog has taken a 3 month hiatus (has it been that long?). There have been a few things happening in that time, and this blog has fallen by the wayside- Which wasn’t helped by the fact that I am technologically backward and forgot my password 😉

I *have* however continued to update via Instagram (The Lazy Person’s Blog) @lisa_bunny, so come stop by for more reliable updates 🙂

Over the last 12 months a lot of things have happened (not necessarily pleasant), and when we moved back to Adelaide (from interstate) it was all rather over-whelming. Not just emotionally and physically (I’m looking at you, 13 + hour drive), but the actual physical stuff that came with it. As a result of multiple interstate moves (both living separately and together), we had accumulated a ridiculous number of possessions for two people (2 couches, anyone? 2 TV’s… 2.. or more… Of everything…) , had two epic moving days, and when we thought we had things under control- we realised that we had a storage container full of stuff in Adelaide to empty as well…

I am filled with shame when I think back to how we approached our move. It was definitely not waste free at all, and it was one of the most stressful things I have done. One clear image in my mind was the morning we moved out of our old home- we had been up all night with no sleep furiously packing our countless possessions, filled with stress that we would leave something behind or that something would break, sniping at each other. We hadn’t implemented a plan to use up our pantry items in the weeks prior, so were faced with culling what we had. We took some favourite items; unopened and in-date items went to the Salvation Army; and opened liquid items- unfortunately- we threw out. And because we were in such a rush before the movers arrived- we tossed everything in the trash. And because our landfill bin was full- it went in a huge bag that we would pay to drop off at the dump later that day. *cringe* Food wastage… Not recycling… Dump frequenters… That was us.

There was a lot of bubble wrap used. And a lot of boxes for all the stuff we had. One saving grace was the week leading up to the move I wandered around the operating theatres in between cases to collect discarded Kymguard (thick plastic sheets that are used to wrap surgical instrument trays in), which is really effective used as a wrapping for fragile items. Now that I know better I would have used more clothes and blankets to cushion items, but I digress.

Upon returning to Adelaide and realising just how much stuff we had- I had a breakdown. It was somewhere between standing in the living room piled ceiling high with sealed moving boxes, and sitting on our second couch outside crying with frustration because it wouldn’t fit through the front door (even with the hinges taken out). Enough was enough. I started aggressively unpacking and aggressively culling at the same time, I was free-cycling like a mad-woman, I sold lots of big furniture via Gumtree (like Craigslist), we even had a garage (yard) sale to get rid of even more stuff. Countless bags of clothes went to the charity store, the poor quality clothes were dropped off at the recycling centre to be cut up as rags or processed for insulation batting etc. I sold stuff at consignment stores, I even woke up at an awful hour in the morning to sell some stuff at the markets: 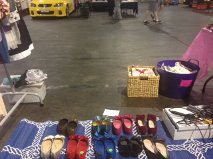 Throughout the process I dreamed of minimalism and started obsessively researching it. First came Marie Kondo, and her book, “The life-changing magic of tidying-up”. 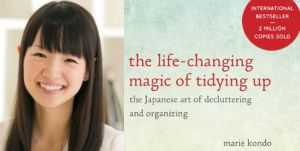 It’s a little kooky, but there are some real gems in there. Especially the advice about keeping only the things that bring you joy. And if I didn’t get anything out of it, at least I finally learnt how to fold clothes in the most efficient way possible. Also-  Colour-coding happened. 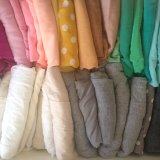 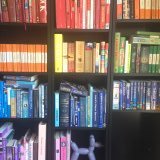 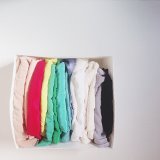 I think stuff in general is my weakness, and clothing was my biggest weakness (and burden). I realised I had been schlepping this mountain of clothes all over the country with me, and some of them never actually left the moving boxes that they had arrived in. Terrible. I also had no idea what to wear, and my most favourite items were being lost in the nether regions of my closet, never to be seen again. Enter Caroline Joy, of http://www.un-fancy.com, who keeps it pretty simple- a set of clothes and shoes for each season, learn how to mix and match and what actually works for you, and continually edit. So I started using a capsule wardrobe, and it was ridiculously effective in helping me cull more things. I also started using Stylebook (an iPad app) at the beginning to give me more of a visual of what I had, and let me play around with outfits. I haven’t used it for months, but a lot of people use it to plan outfits for trips etc. I love a good visual packing list! Here are a few examples from Summer:

Finally- I stumbled on images of Bea Johnson’s minimalist home (www.zerowastehome.com) and I was hooked. What had I been doing all my life? Then I saw an article on Lauren Singer (www.trashisfortossers.com) in Frankie magazine and I was convinced- I had to at least try this!

Sorry about the long post (I guess it makes up for the 3 months of radio silence 😉 ). I am always interested in what people’s “green” or “zero waste” epiphany moments are- that moment you realise that you’re part of something much bigger than yourself, that it’s time to make some changes.  What was your epiphany moment, what has your journey been like? Because nobody goes zero-waste overnight- it’s an ongoing process, always new things to learn and try out. We also have (in my opinion) one of the most supportive Internet community out there- Everyone is lovely and supportive of each other, it really makes this feel like a team effort.

p.s. Our house is much nicer now and a lot less cluttered (but we still have more stuff than I care to admit), it has become more of a haven and I’ve finally felt comfortable about inviting people over. 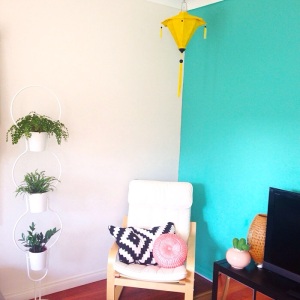 2 thoughts on “It’s all about the journey”